Economic Development for Peace and Stability in Plateau State, Nigeria

The project ‘Economic Development for Peace and Stability in Plateau State’ is closely linked to and implemented together with the GIZ-SEDIN Programme which has been operating in Plateau since April 2011 and a predecessor programme since 2009, both promoting micro, small, and medium enterprises (MSMEs). Both are implemented jointly by the Deutsche Gesellschaft für Internationale Zusammenarbeit (GIZ) GmbH. Due to this linkage, it is possible to have synergy and leverage effects of implemented activities.

The project is funded through the ‘Instrument for Stability (IfS)’ fund by the European Union. Furthermore the project collaborates with two NGOs, Apurimac and Search for Common Ground, which are implementing the other two IfS-funded projects in Plateau State.

The overall objective of the project is to contribute to the reduction of conflicts and improved peace and stability in Plateau State through employment creation and increased income.

Due to the variety of activities the project has various target groups and beneficiaries. Under the first pillar, MSMEs as well as MFBs are targeted; the final beneficiaries would be those MSMEs that are able to improve their financial situation. The second pillar works with NGOs and lobby groups as well as (potential) business start-ups and MSMEs, with a specific focus on the youth and on women. The third pillar deals with the private sector (MSMEs) as well as the public sector (local governments) on the local level aiming at improving the conditions for businesses in the selected areas. Lastly, the fourth pillar targets participants of the selected value chain, the producers as well the processors who are at the same time the final beneficiaries. 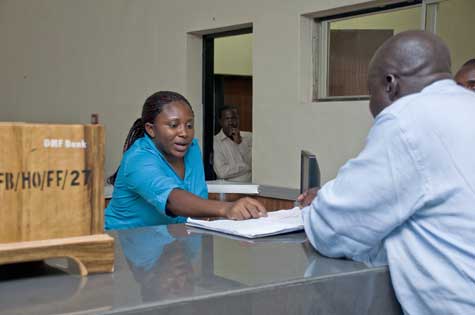 Federal level and selected states and border areas in Nigeria

In the 20 months of implementation, the following activities have been carried out: